What’s trending on the left-hand side of the menu varies across different parts of the country.

Consumers have their favorite appetizers and snacks, and often these preferences vary based on geography. Operators are menuing starters, shared plates and snacks that satisfy consumer demand for small bites that work well in a region’s climate, feature locally sourced ingredients or simply have a long tradition in a certain locale.

According to the mobile and online food ordering company Grubhub, vegetables are trending in California:

California has long been known as a source of great produce, says Eric Stangarone, founder of Food Thinking, a consultancy based in San Francisco. “What you see is the anchoring of appetizer menus based on historical foods,” he says. For example, crudités that showcase local vegetables are popular now in California. “Crudites are a great way to have something shareable without adding a bunch of calories.” 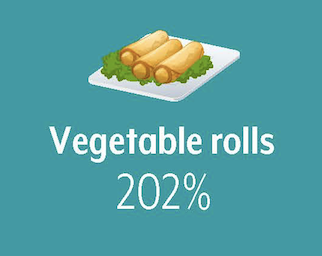 At Phoenix-based True Food Kitchen, one of the top-selling appetizers is the Charred Cauliflower, featuring harissa tahini, medjool dates, dill, mint and pistachios. “Vegetable-driven small plates are the biggest trend right now,” says Taylor Domet, director of culinary standards. He adds that of the chain’s 22 locations, eight are in California, where guests are likely to order lighter fare.

Operators say consumer favorites can vary by state, even within the same chain. Most locations of Lazy Dog Restaurant & Bar are in California, where one of the most popular small plates is Ancient Grains and Roasted Veggie Salad. When the concept opened a location near Denver this winter, guests, however, opted for some warm plates:

“We’ve never had a restaurant where it snows,” says Gabriel Caliendo, vice president of research and development. “Guests really leaned in to our hot foods.”

Menus in the southern and southwestern states still reveal a Mexican food influence, Stangarone says. He points to pimento cheese as part of the trending appetizers there. In addition:

In Florida, seafood still ranks as a favorite appetizer:

Pickles are also a big hit at The Counter, a better-burger brand from Scottsdale, Ariz.-based Kahala Brands. The Counter has more than 40 locations, and in Reston, Va. the Fried Dill Pickles with apricot sauce are a big seller. “We think they are a customer favorite since our chef grew up in the East Coast and pickles are a preferred food there,” says Rachel Cohn, director of marketing for The Counter. Other popular appetizers include:

Larkin adds that Crab Dip is probably the No. 1 item on the menu overall, not just in Maryland but also in New Jersey, Pennsylvania, West Virginia and Long Island, N.Y.

While regional preferences are important, operators should also consider food costs and margins.

Our infographic provides insights on regional trends that influence consumer preferences on appetizers & snacks. Or download our Vegging-Out White Paper, to learn what consumers expect from meatless meals plus fresh ideas for adding vegetable-centric items to your menu.